What is the Tools explorer? Print

Context   sensitive   tools   in   the   DSS   are activated   by   the   selected   object.   Upon selection of an object from the DSS database, the  possible  list  of  tools  that  can  be  used  to manipulate  the selected  object  are  activated and displayed thematically in the tools explorer as shown in Figure 1 for time series data as an example.  The user can choose the desired tool from the list to analyze/process the selected object as well as setup the output configurations.  The Tools Explorer give the user the ability to save tool settings from within the Properties window. The saved settings can then be accessed from the tools explorer.

The other category of tools in the DSS are generic in nature and are not sensitive to selection of an object. These tools are categorized as 'Other tools' in the tools explorer as shown in Figure 1 and can be applied to all objects in the DSS database. These tools facilitate importing and exporting of data to and from the DSS as well as transferring of data within studies and workspaces. In the Tools Explorer, there is a search bar that allow you to quickly access the tool you are after by typing the first few letters of its title. 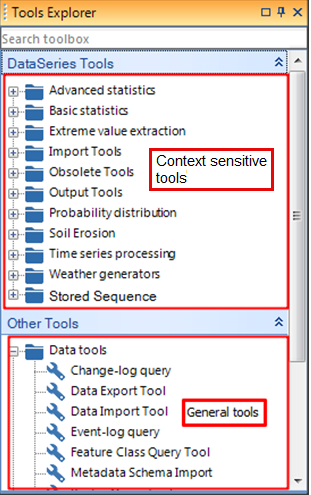