The NB-DSS can be installed on Windows 7, 8 or 8.1. Other operating systems are not currently supported. In addition to the Operating System requirements specified above, the DSS requires Microsoft .NET Framework 4.0 to be installed. To install Microsoft .Net Framework 4.0, you should locate it from the prerequisites folder on the MIKE By DHI DVD or download a copy from the Internet. It is recommended that you have a computer with a minimum processor speed of 2.0 GHz or higher, 2 GB (or higher) of memory, 40 GB (or higher) of HDD, 64 MB RAM of graphics, one USB port for the DSS hardware key among others.

Installation of the DSS on Windows requires you to install three software components. These include; 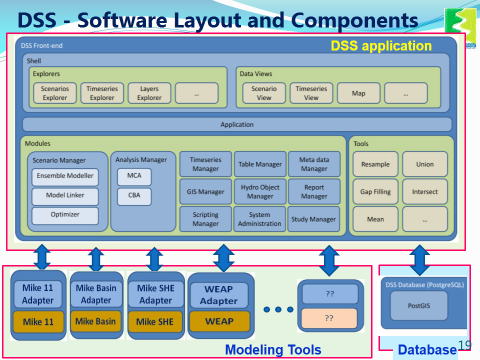 Mike Zero is a licensed software group that contains MIKE family modeling tools such as Mike Hydro, Mike 11, Mike 21, Mike 3, Mike She and Mike Flood and comes in two versions; 32-bit and 64 bit versions. It is recommended that you install the 32-bit version of Mike Zero to ensure compatibility with the NB-DSS application. Mike Hydro is installed and used for water resources modeling. You will need to install a software license and you must obtained a USB dongles from the Nile Basin Secretariat in order to use Mike Hydro.

Installation of the DSS on Linux means installing the database management system (PostgreSQL and PostGIS) on a centralized database server running Centos Linux. As with Windows, the Modeling tool (Mike Hydro) and the DSS application are installed on computers running Windows in a networked environment. The DSS application is then configured to access the database server through the network. This setup defines the corporate edition of the DSS. This edition is recommended where concurrent use is a major requirement.